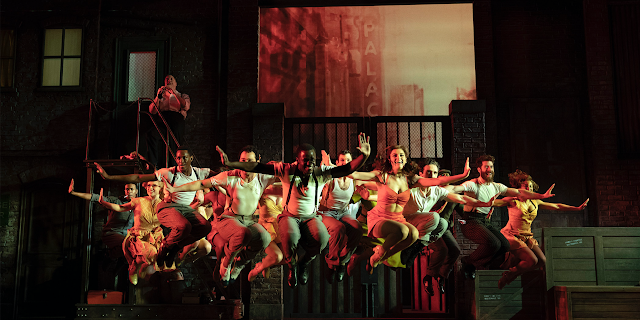 It's Theatre Thursday once again, and today we're talking about none other than the 1949 Tony winner for Best Musical: "Kiss Me, Kate". This show was the composer's response to Rodgers & Hammerstein's "Oklahoma!", which had taken the musical theater world by storm by introducing a new type of musical in which the songs were fully integrated with the book and played an active role in character and story development. (The composer's name is in the grid, so I will not be saying it up here). Incidentally, it was also the only show of this composer's that ran for over 1,000 performances on Broadway. The story of "Kiss Me, Kate" comes courtesy not only of Shakespeare, but of some real-life stage drama as well. Husband-and-wife actors Alfred Lunt and Lynn Fontanne (after whom the Lunt-Fontanne Broadway theater is named) had co-starred in a 1935 production of "The Taming of the Shrew" and shared both some on-stage and off-stage drama. This drama was witnessed by future Broadway producer Arnold Saint-Subber and in 1947 he approached Bella and Samuel Spewack (who were undergoing some marital drama of their own) to write the script. Bella, in turn, enlisted the composer, and the rest is history! I hope you enjoy the solve! 🎭🧩