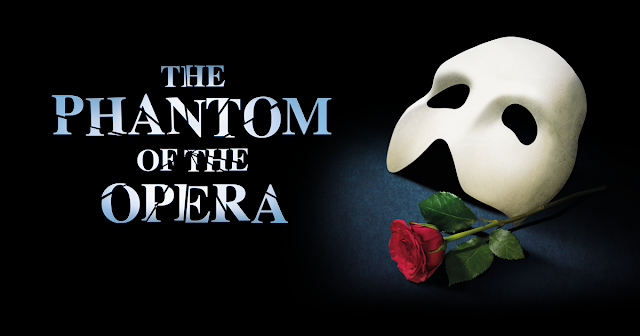 Like it or not, there's a lot to be said about The Phantom of the Opera. For starters, it's Broadway's longest running show -- and by a fairly significant margin with 13,370 performances to its name and 32 years on the stage. For comparison's sake, the show in second place is the 1996 revival of Chicago, which opened 8 years later and currently comes in at 9,692 performances. The Phantom of the Opera opened on Broadway exactly one week before I was born, and it was the very first musical I ever remember loving (besides the Mary Martin "Peter Pan", which I demanded to watch on repeat as a child). We had the cassette tape, and trust me when I say that it was played. And played. And played. (But only in the car with my mom, because my dad hates musicals. Funny how that works). To be completely honest, I could probably perform the show for you in its entirety -- yes, like, just me. And my piano. All the characters. My relationship with Andrew Lloyd Webber basically begins and ends with this show, and from a dramaturgical standpoint there are...er...some things, but I love it nevertheless. And for what it's worth, I despise and am humiliated both by the notion and execution of "Love Never Dies," which frankly should never have been made. Why you would make an unnecessary sequel to a wildly popular show that is STILL running on Broadway after 32 years will forever be beyond me. (I do understand they must have thought they'd make money, but they were wrong). And while we're at it, let's just go ahead and acknowledge that the film adaptation was absolutely terrible, despite Emmy Rossum being completely lovely and Patrick Wilson capturing the exact essence of Raoul that is necessary for the entire plot to function. ANYWAY...it only seems appropriate that I eventually pay tribute to what, in some ways, could be called my first love in the theater. And if there is anyone out there who is actually Team Raoul, please make yourself known. Because I have a hard time believing that you exist. 🎭🧩

Posted by Amanda Rafkin at 7:00 AM