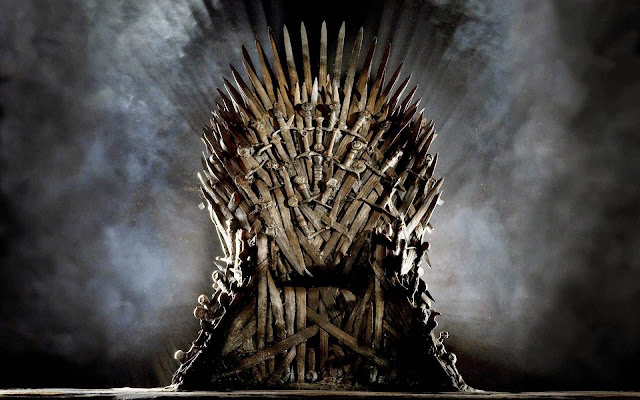 I'll just go ahead and tell you right now: this puzzle has nothing to do with Game of Thrones. I'll also throw in the added confession that I've never actually seen Game of Thrones, but given my general timeline of catching popular shows between 10-20 years after their final air date, we can expect that I'll finally dig in around 2035 or so. I asked David yesterday if he remembered when we made this puzzle (time is dead to me), and his memory was that it was around the beginning of quarantine. In other words, the good old days when we were all baking bread and waiting for a stimulus check. The process of making this puzzle was so delightfully collaborative: we brainstormed theme material together,  largely built the grid together over Zoom, and wrote the clues together in a shared document. Basically, working with David was an incredibly nice process! He recently got his own puzzle site Grid Pro Quo up and running where he posts puzzles with themes that promise to be "a little too nerdy, or a bit niche, or way too complicated for your friendly neighborhood newspaper." Go check them out!

If you solve this puzzle in Across Lite, the answers that are starred in the .puz file look a little different (in a helpful way) in the grid below. So take a look here if you get stuck -- oh, and put on your NYT Thursday thinking cap. We hope you enjoy the puzzle! 🧩

Here's David: I think this puzzle is a great endorsement for the power of Crossworld and Crossword Twitter. Amanda and Ross (Trudeau) connected online and now she's downright prolific. I started workshopping my first puzzle through Erik Agard's Crossword Collaboration Directory on Facebook a year or so ago, and am currently having a blast cutting my teeth constructing. So when Amanda asked on Twitter if anyone was interested in collaborating, it seemed like a great opportunity to see what we could come up with together. A few DMs and Zoom calls later, and we had something cooking.

Once we had a theme that clicked with both of us, we were happy to find themers that popped, and that even had the same kind of personality as what we were going for in the rest of the fill and grid. As a newer constructor, it's sometimes still hard for me to tell where the line is between being overly ambitious and overly cautious in designing the grid, but Amanda encouraged opening up the grid a bit to allow for longer non-theme entries, which made room for some very fun entries and hopefully makes for a more fun overall solve. There's a lot in the grid and the clues that I'm sure I wouldn't have gotten to on my own, but which quickly became my favorites, so it's got a great blend of our voices and senses of humor -- hope folks enjoy!

Posted by Amanda Rafkin at 7:00 AM