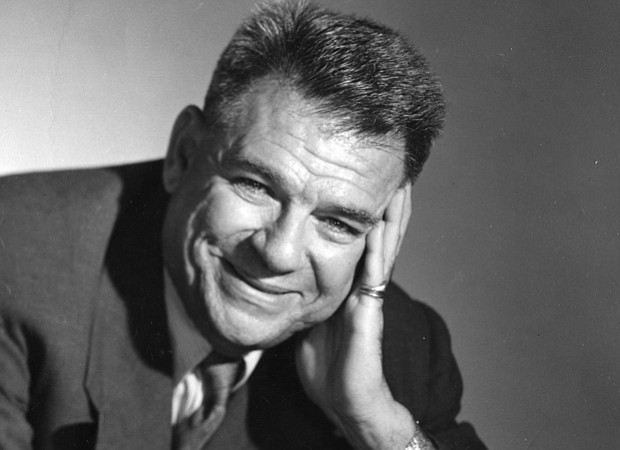 Spoilers included! Read after solving if you so desire.

This Theatre Thursday, I'm taking an opportunity to recognize the man who could arguably be considered the most important person in the history of the American musical theater: Oscar Hammerstein. This is quite a bold statement I know, but not one that comes without sufficient evidence, I assure you! In his roughly 40 year career, Hammerstein co-wrote 850 songs. With Richard Rodgers alone, he wrote 11 musicals (Oklahoma!, Carousel, South Pacific, Cinderella, The King and I, and The Sound of Music, to name a few). This doesn't include collaborations with the five other composers with whom he also wrote musicals, including "Show Boat" with Jerome Kern. None of this, though, is actually evidence for my claim. It's merely wildly impressive. In truth, Oscar Hammerstein changed the entire landscape of the American musical theater as we know it by popularizing a musical form that focused on character building and storytelling, rather than the songs or stars. At the time of their production, both "Oklahoma!" and "Show Boat" were about as revolutionary as "Hamilton" felt to our generation, though it was in fact was quite a bit more so. No one came close to moving the needle on innovating the style of the American musical until Sondheim's 1970 musical comedy "Company", which was essentially the first concept musical (a show told in vignettes rather than following a linear timeline). Oh, and speaking of which, Oscar Hammerstein is single-handedly responsible for giving us the genius of Stephen Sondheim.

After Sondheim's parents divorced when he was ten, he befriended Hammerstein's son and began spending a lot of time at their home, where Hammerstein became a surrogate father of sorts. Sondheim has been quoted saying that whatever it is Hammerstein had done as a profession would have been with he [Sondheim] also wanted to do. After writing a musical that was popular among his schoolmates, he asked Hammerstein to evaluate it, at which time he was told that "It was the worst thing I have ever seen, but if you want to know why it's terrible, I'll tell you." Hammerstein then proceeded to spend the rest of the day going over the musical with Sondheim, teaching him "more about songwriting and the musical theater in that afternoon than most people learn in a lifetime". Hammerstein then designed a course for Sondheim on constructing a musical, and had Sondheim write four musicals each with different conditions: a play he admired, a play he liked but thought was flawed, an existing novel or short story not previously dramatized, and an original. You don't need me to tell you the outcome of this origin story.

The now-famous song "If I Loved You", which is featured at 13-Across, is a part of what's known as "the bench scene", a 12-minute long segment of "Carousel". According to Thomas Hischak, one of the foremost authorities on the American musical theater, this scene "is considered the most completely integrated piece of music-drama in the American musical theatre". Sondheim described the same scene as "probably the single most important moment in the revolution of contemporary musicals".

So why, out of all of the influential people in the history of musical theater, does Oscar Hammerstein not have a fucking Broadway theater named after him?! This is the question I leave you with on this fine Theatre Thursday. I hope you enjoy the solve, if I haven't scared you off with all of this text. 🧩

Posted by Amanda Rafkin at 8:21 AM