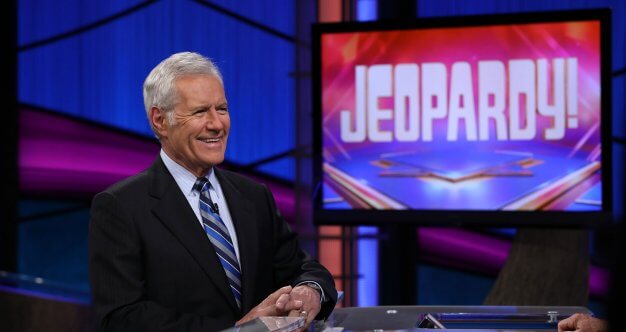 Today's puzzle is my first attempt at using diagonal symmetry, which to me always kind of looks a little like an insect and whose weirdness I am fully here for. (See the antennas in the top left and the little legs in the bottom right? No? I see. That's fine). I also capitalized on the opportunity to use a picture of America's Sweetheart for today's post. I can't think of a single person who doesn't love this guy, and I know that many folks in the crossword community have had a chance to be on Jeopardy! and see him in action firsthand. One of the best birthdays of my life was sitting in the front row at a taping of Jeopardy! It actually turned out to be James Holzhauer's first game; I congratulated him after the show, having no idea what was to come. A few months later, I returned to go to another taping and, much to my intense surprise, James was STILL FUCKING PLAYING! Suffice it to say that was a bit of a spoiler for the insane run that was to come, but that wouldn't be aired until about 4 months later. Anyway, story time is over. Here's the Monday midi! 😄🧩