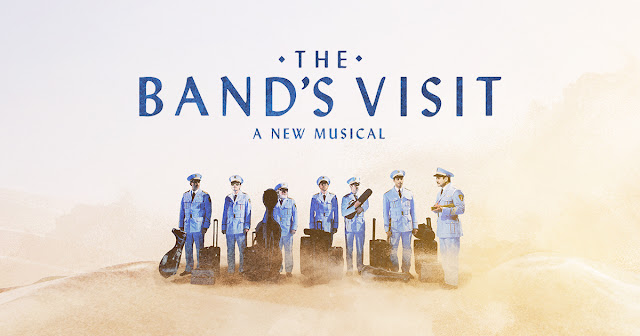 Today's puzzle focuses on a show that I'm currently having some deep-seated FOMO around -- The Band's Visit. I had been dying to see this show since it opened on Broadway, and it was supposed to finally be in LA in May. I think at this point we all know what the outcome of that was. The Band's Visit is a very unusual musical by many standards: where many of the shows that come through Broadway are large and extravagant, The Band's Visit is quiet and subdued; the style of music is wildly unique and unlike most anything else you'll hear from a Broadway cast album; and the level of intimacy is extraordinarily high. Despite it's departure from the norm, The Band's Visit is one of only four musicals in history to win the unofficial "Big Six" Tony awards (Best Musical, Best Book, Best Score, Best Actor in a Musical, Best Actress in a Musical, and Best Direction of a Musical). It also won the 2019 Grammy award for Best Musical Theater Album.

The story itself takes place in an Israeli town where every day feels the same. Local cafe owner Dina has long given up her dreams of finding romance and spends her days daydreaming. But when a band of Egyptian musicians show up lost, she and her fellow locals must take them in. This results in a magical night in which all are able to overcome their cultural differences and find companionship through an undercurrent of shared melancholy, leading to a permanent change in the town and its people. Watch the cast of The Band's Visit perform a Tiny Desk Concert here. The music is truly beautiful, with a beloved classic being Omar Sharif. Give the album (or these videos) a listen if you're not already familiar. I think you'll find yourself enchanted 🎭🧩

PS: There is a picture in one of the clues, so take a peek here in-browser first if you're planning to solve the .puz file.