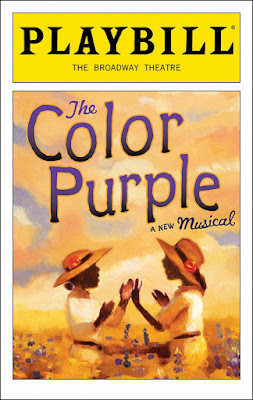 Today's Theatre Thursday puzzle is lightly themed around the 2005 musical "The Color Purple", which was an adaptation of the novel of the same title. The book portion of the musical was written by playwright Marsha Norman (who won the Pulitzer Prize in drama for her play "'night, Mother") and the music was written by songwriters Brenda Russell (5 Grammy nominations), Allee Willis (2 Grammys awards, 1 Emmy award, and co-writer of the "Friends" theme song), and Stephen Bray (ex-boyfriend of and collaborator with Madonna). The original Broadway production ran for nearly 3 years and was nominated for 11 Tony Awards. The show was remounted on Broadway in 2015 and ran until 2017, starring absolute queen and legend Cynthia Erivo. If her name sounds familiar, you might remember her from her stunning performance at this year's Oscars, where she sang the song she co-wrote for the film "Harriet", which she also starred in and was nominated for. Check it out here if you haven't heard it yet. And, as always, enjoy the solve. 🧩